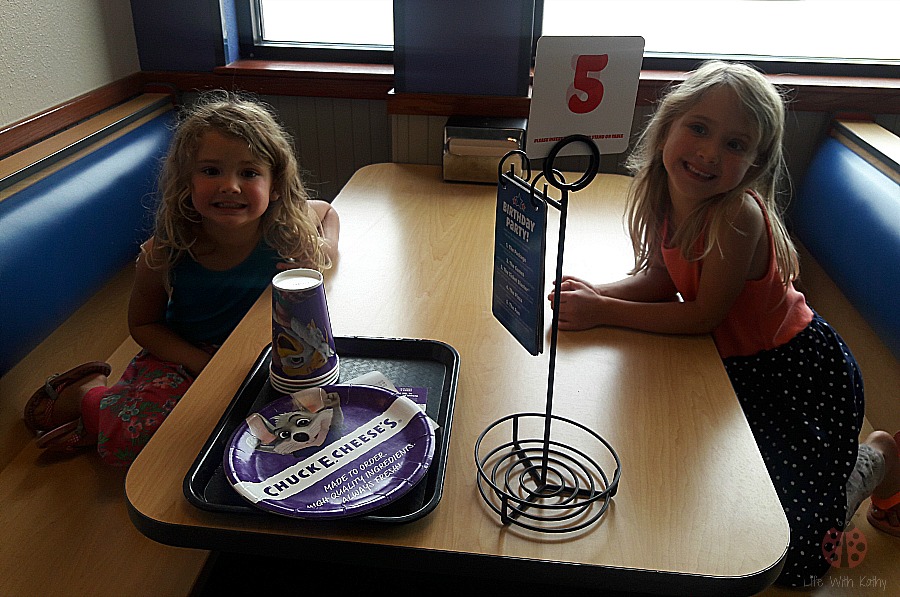 I had gotten a couple of Chuck E. Cheese’s passes, so I knew that I had to take my daughters sometime. My oldest daughter Mercades, had to get three teeth pulled, so we were in the area and she first just had them cleaned. After getting her teeth cleaned we ended up taking my daughters to Chuck E. Cheese’s. They were talking about this for such a long time, so they were very excited to get to go.

Everyone was very nice when we arrived. We were greeted and the lady told us about everything. It was our first time ever at a Chuck E. Cheese’s, so we didn’t know anything about it. They no longer do the tokens, so they now have points on cards instead. 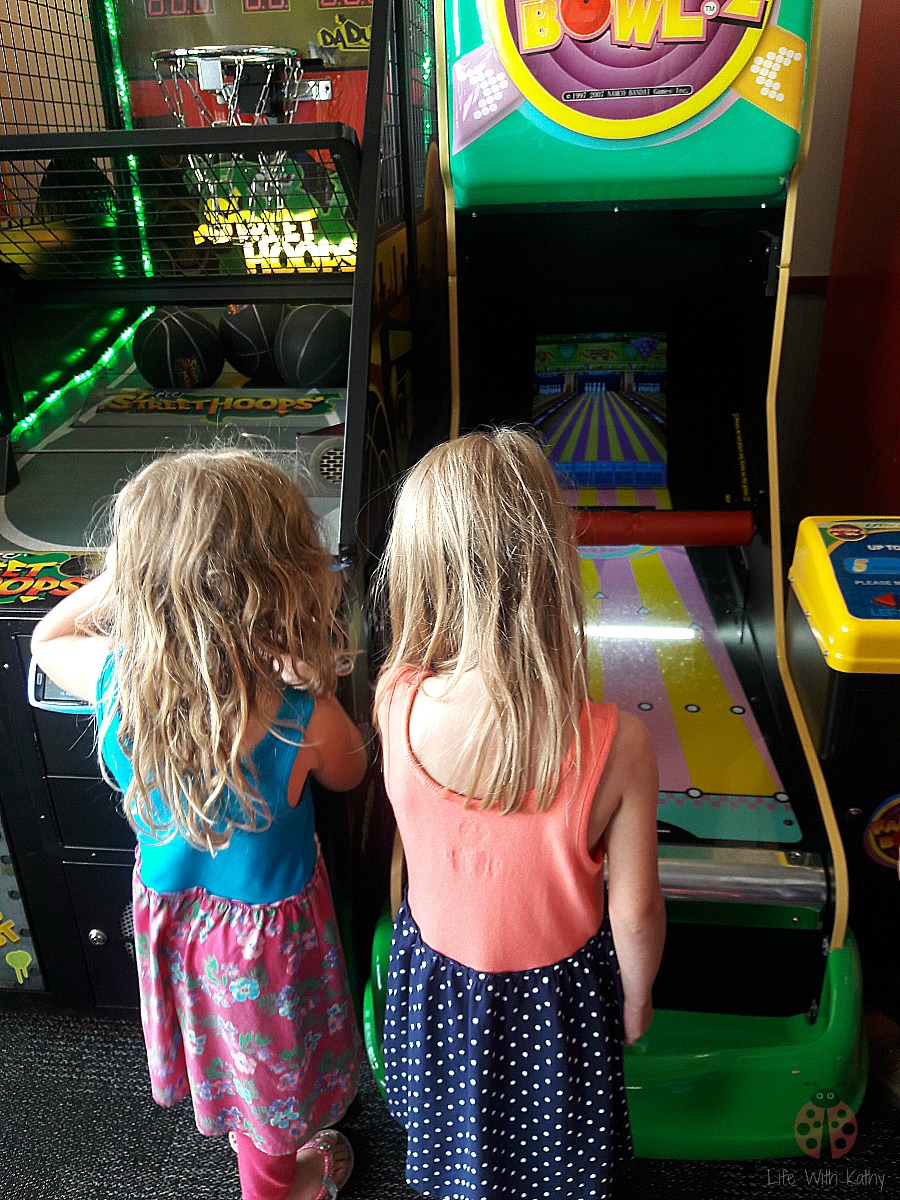 We used our passes, which included four drinks, a large pizza and 300 points. I had two passes, so I later on used another one. After we did that we started playing games while we waited for our pizza. One of the first games my girls played was a bowling game. 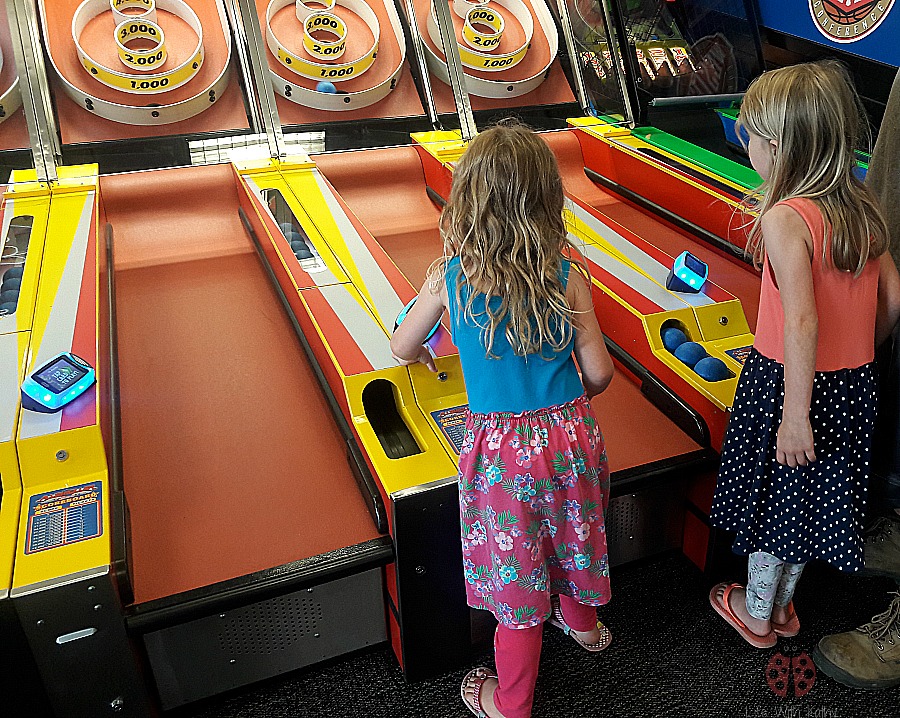 I can’t remember the name of this game, but I’m sure many of you will recognize this one. It’s where you throw the ball and try to get it to land in one of the circles. Each has different points and you’re trying to aim for the most points of course. I use to play this game a lot when I was little. It was fun being able to teach my girls how to play it as well. 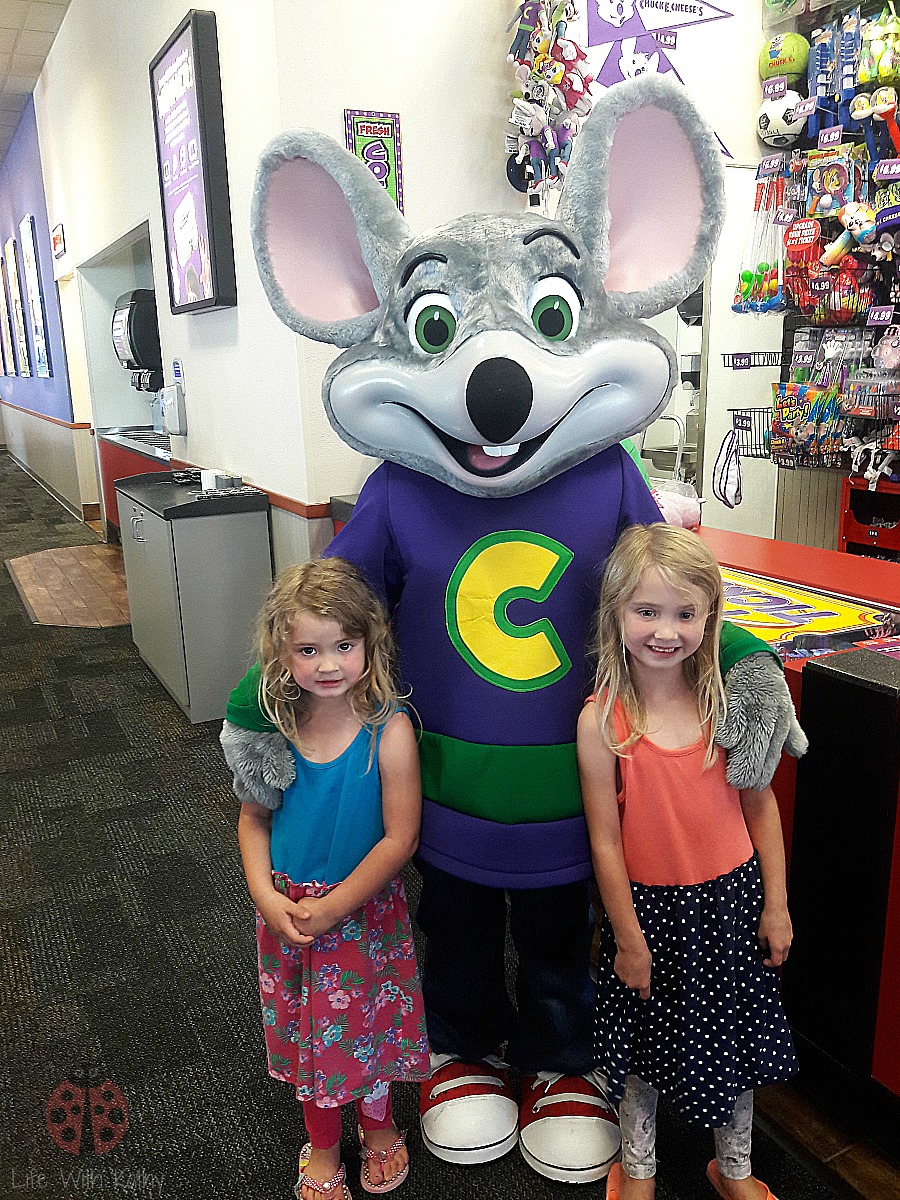 My daughters even got to meet Chuck E. Cheese! They were excited about this. He would come out about every hour and all the kids would have to follow him once they saw him. After that they would stand around with him and do a dance. After they danced, he would throw some tickets so everyone could get some. My daughters loved that. 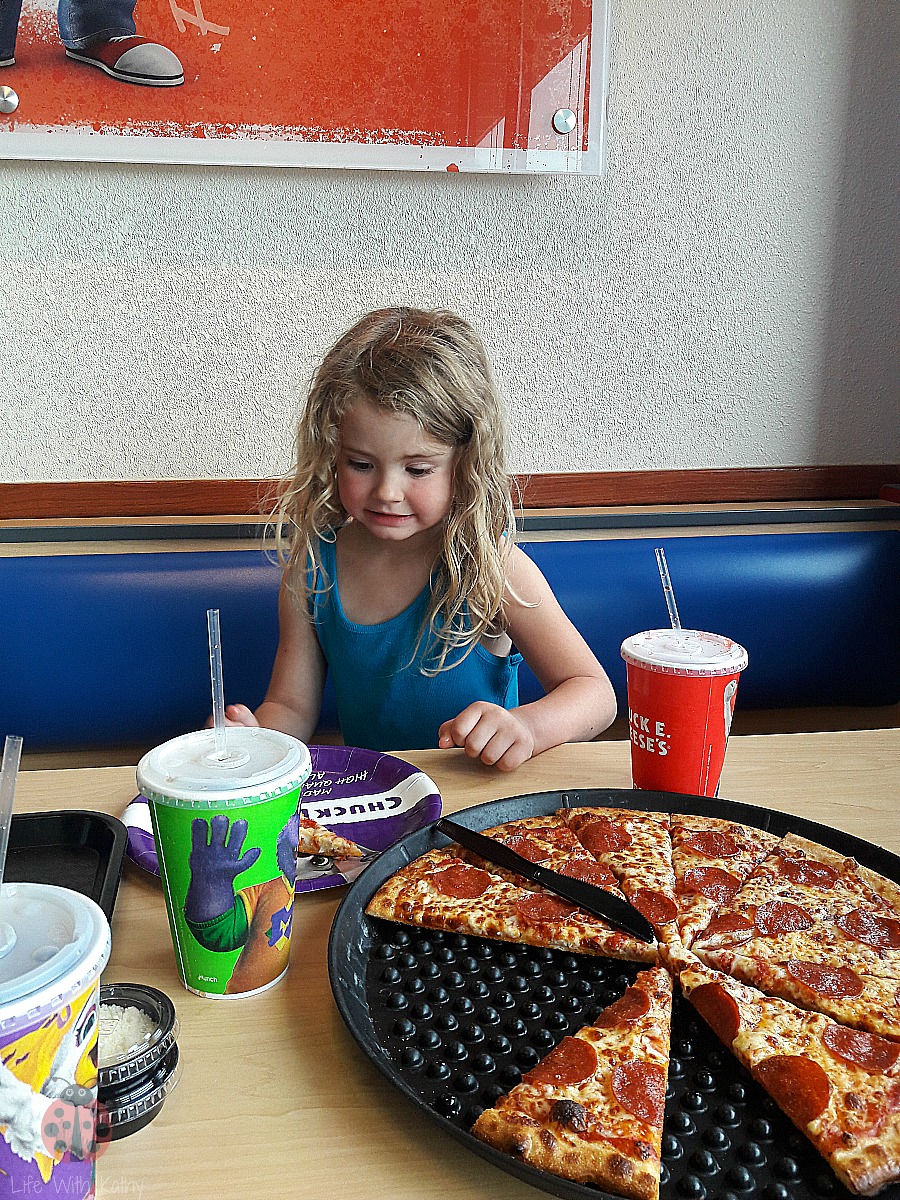 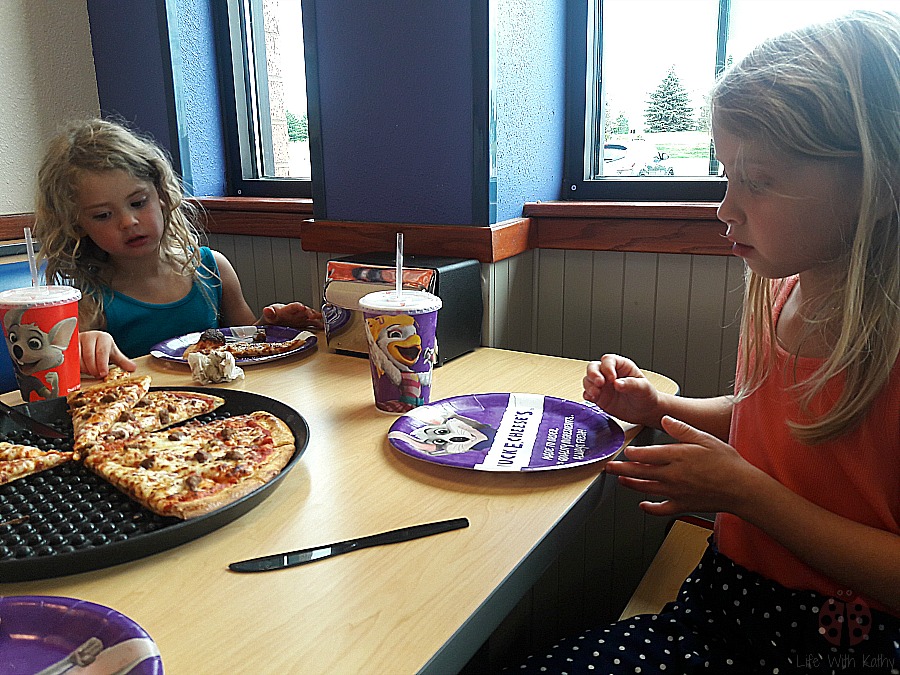 The pizza was delicious! We went with the original crust and we all loved it. As you can see, we ended up going back for more. We ended up getting two large pizzas. One was pepperoni and the other was sausage. 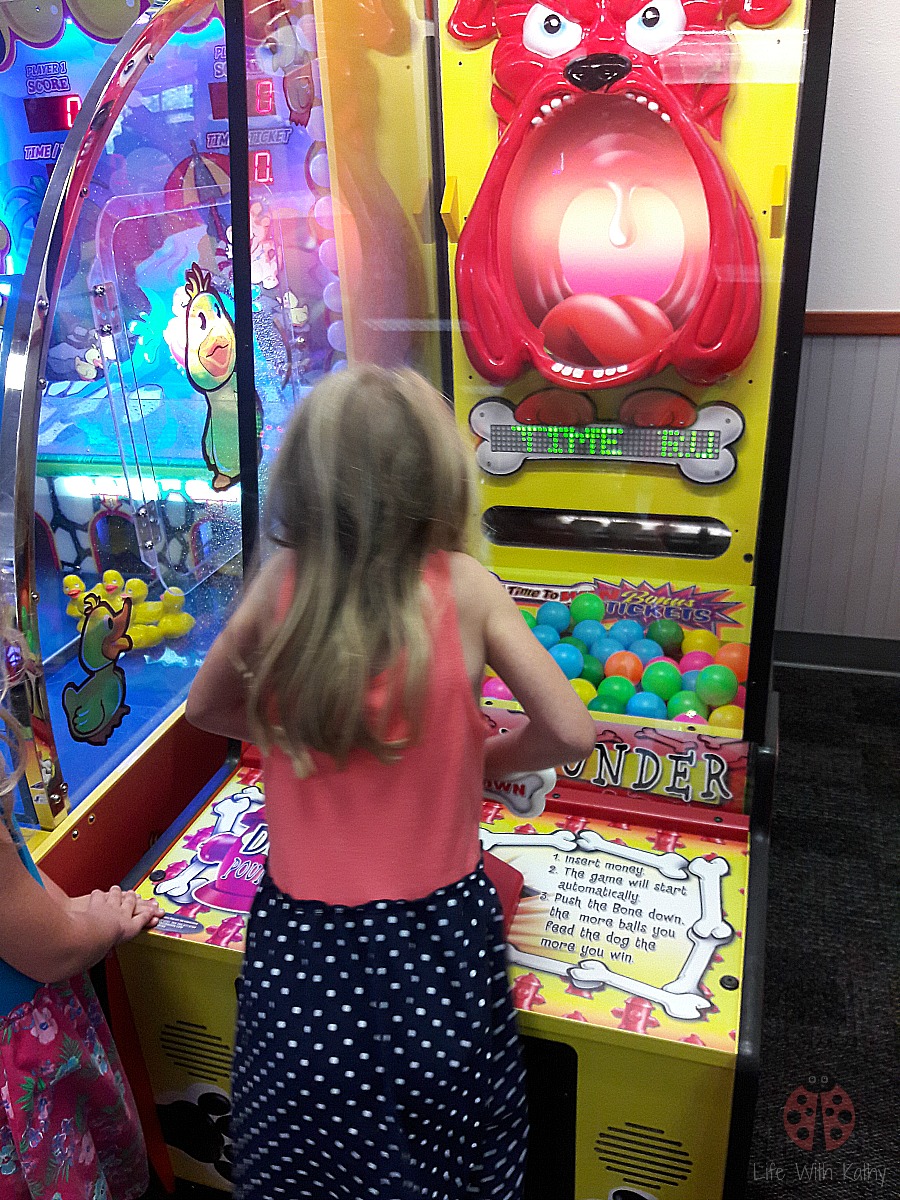 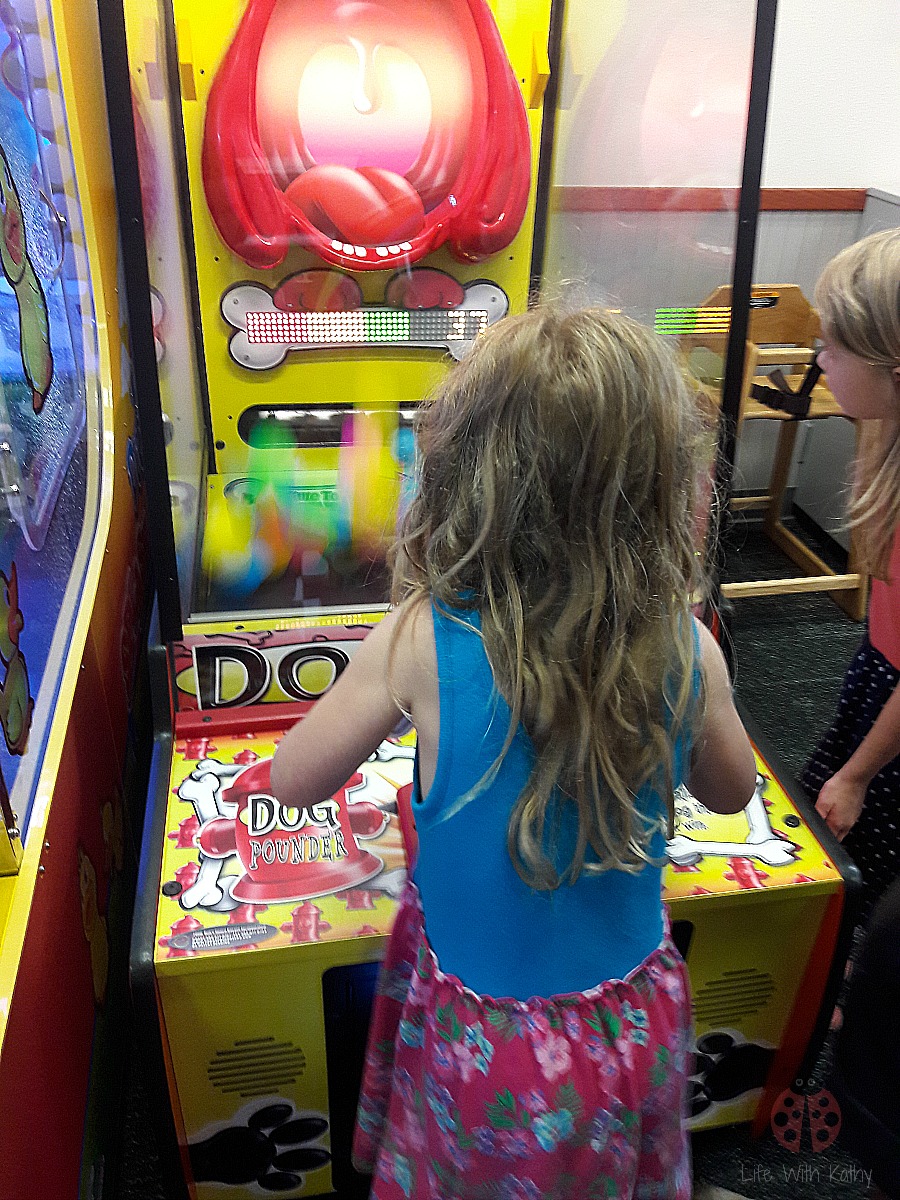 The Dog Founder game was fun for my girls. They had to press down on a lever and the balls would go in the dogs mouth. They had to keep doing this to get them in his mouth. They loved being able to do this game. It was fun watching them get all excited as well. 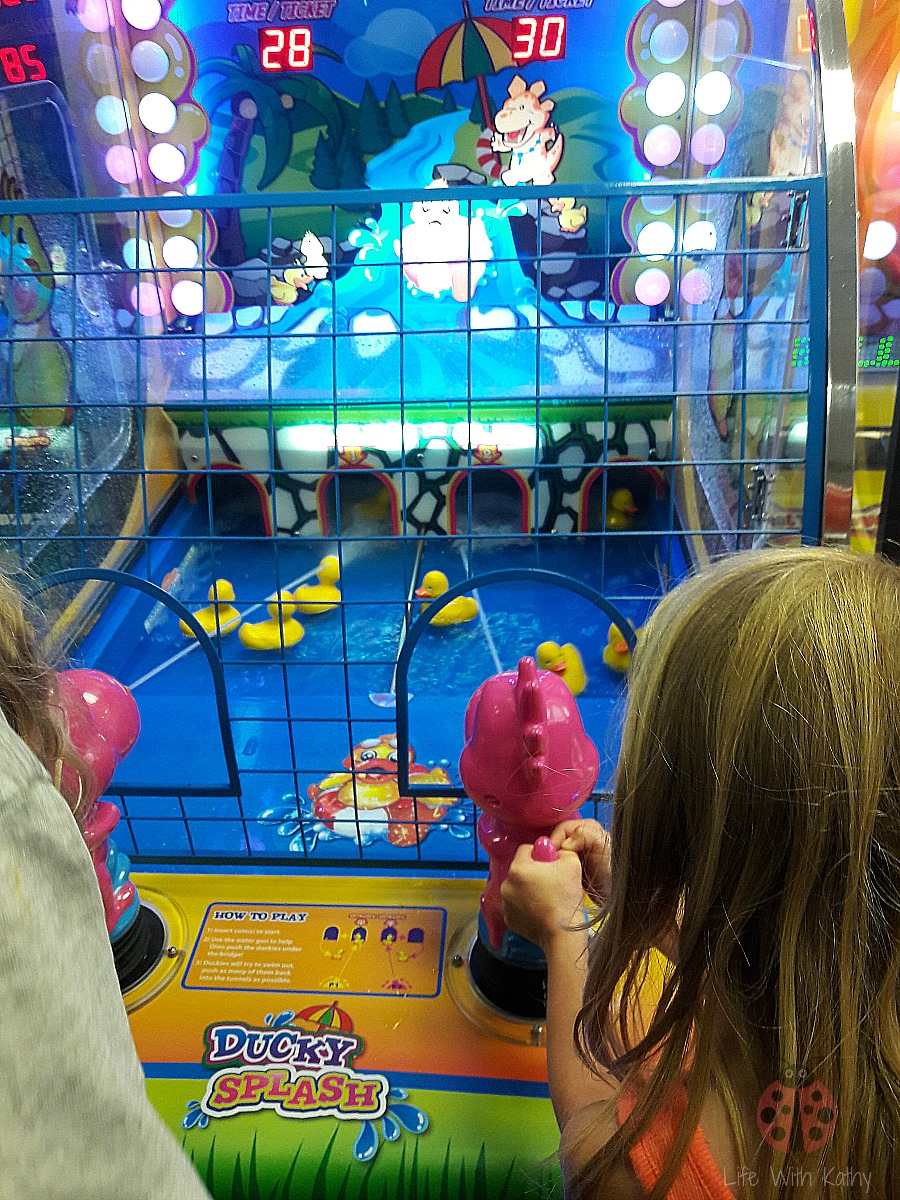 Ducky Splash was another fun game for my daughters. They got to squirt the water at the ducks to get them in the holes. The player that got more in won the game. My daughters actually ended up with a tie at the end of the game. They both got the same amount of ducks in the holes. 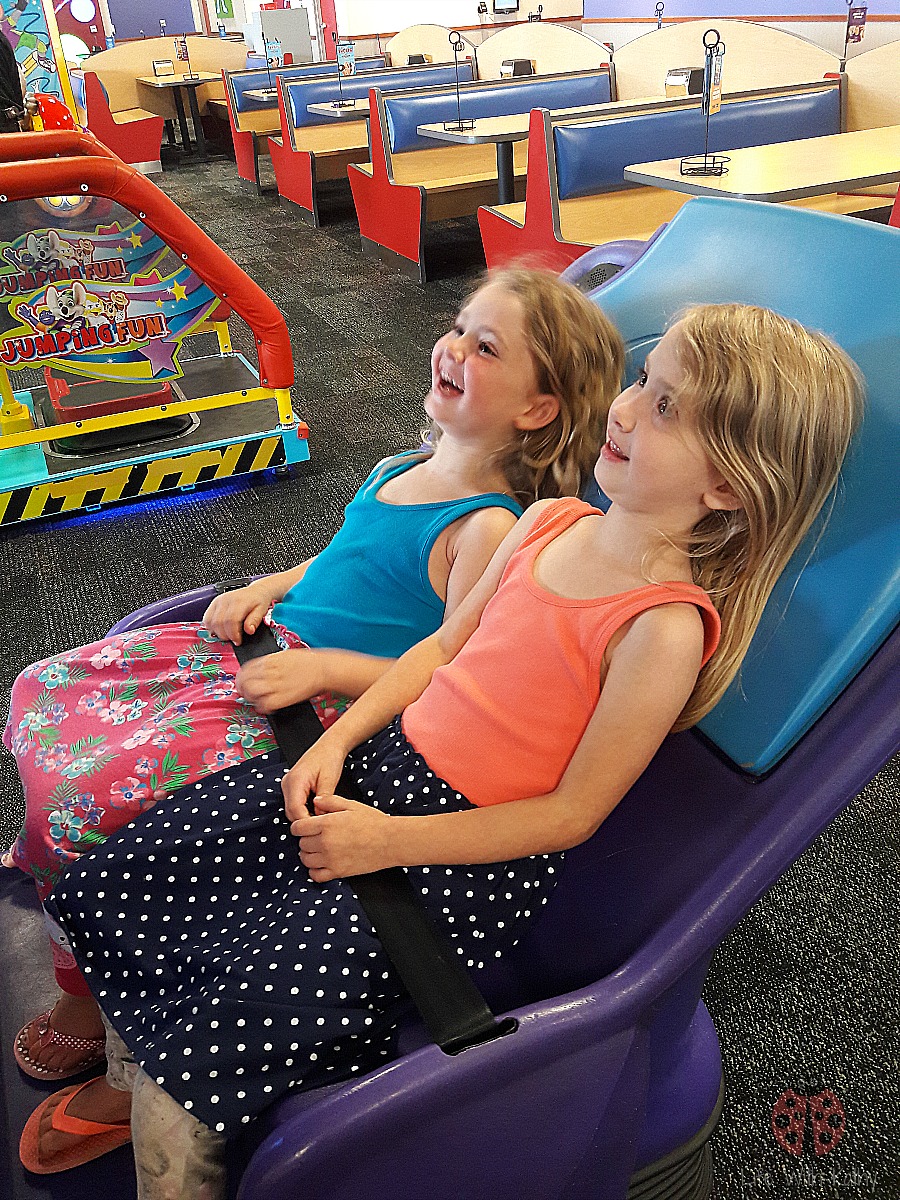 They also had more than just games. They had a few things that were like rides too. You can see the excitement in my daughters as they were sitting on this one. They had three courses to choose from, and they chose the roller coaster one. That means they were watching as it was going around on a roller coaster, and it would make it seem like my girls were actually riding it. It would vibrate and move around some. It was so fun watching how excited they got with this one! 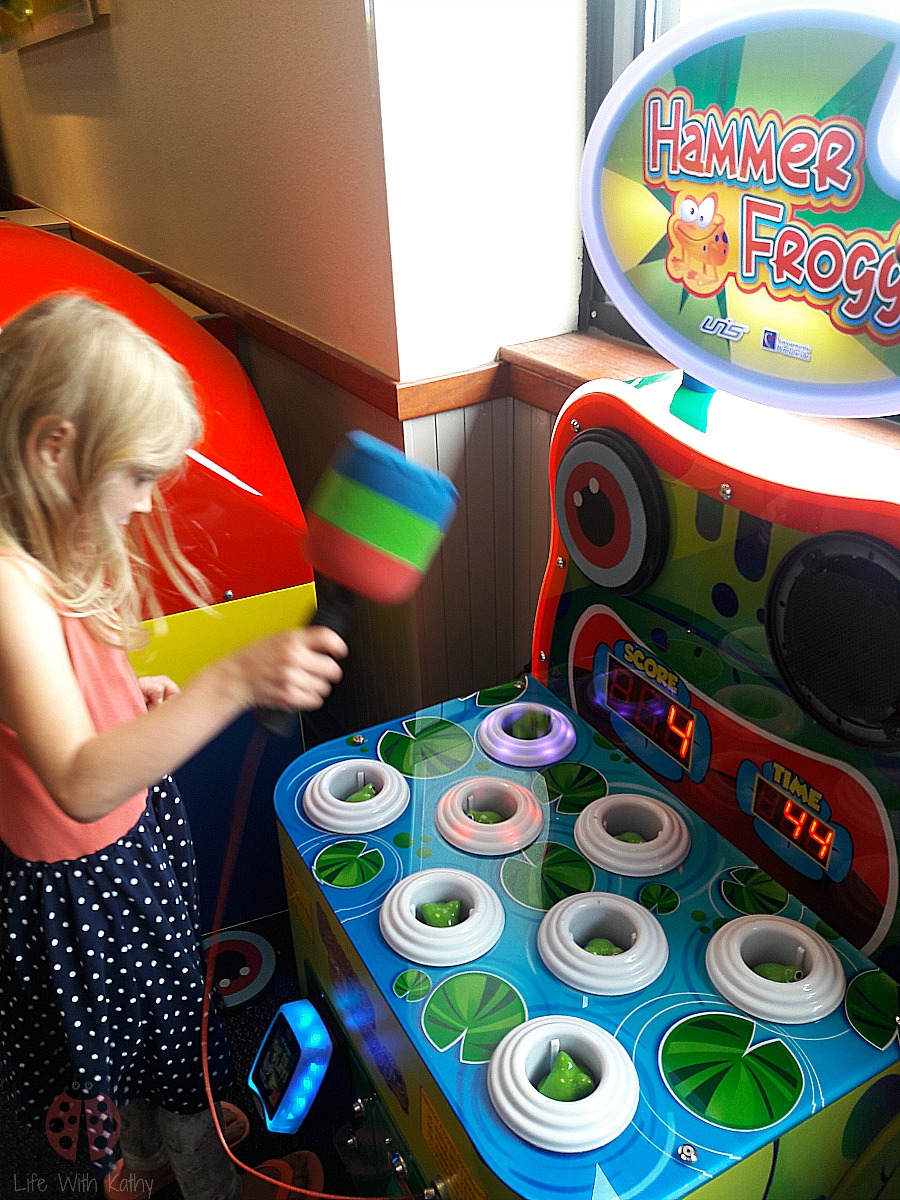 Hammer Frog was another fun game to play. My daughters enjoyed being able to hit the frogs on the head with the hammer. I’m sure many of you have played games that are very similar to this one. It was certainly a lot of fun for them too! 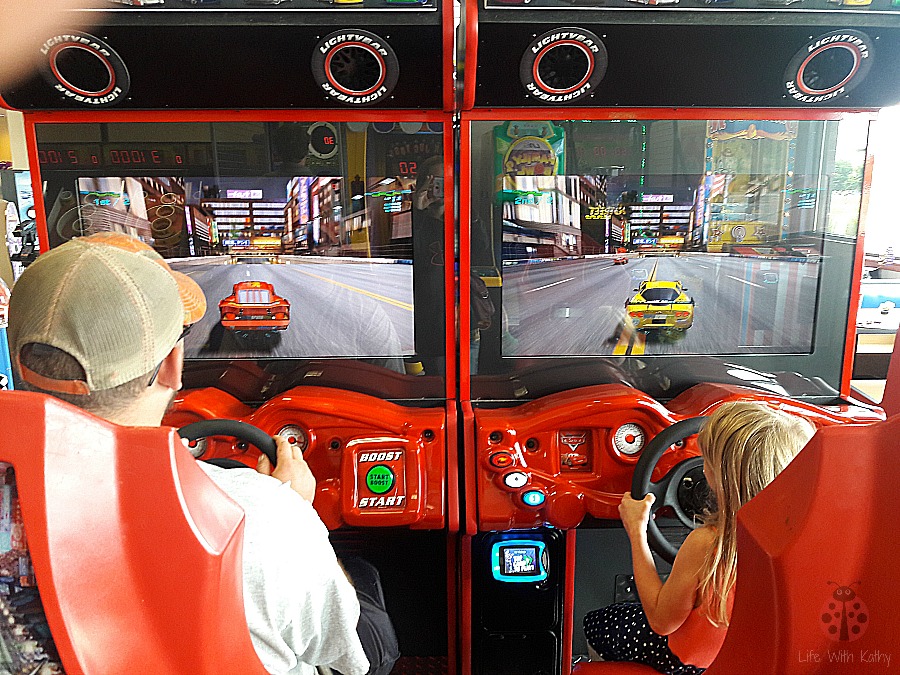 They did have a lot of adult games as well. There was a car racing one that my daughter Mercades played with my husband (her father). She may have been a bit short and had to lower herself down, but she enjoyed racing with her father. My husband loves these types of games, so this was fun for him as well.

Overall we all had a lot of fun. My youngest daughter, Tesla still talks about Chuck E. Cheese’s all the time. She certainly wants to go back again. She says that it was one of the best places she’s been to and that it was so much fun. I loved to hear that! We will definitely be going back here again.

Have you ever been to Chuck E. Cheese’s before? Did your kids enjoy it?

Leave a Comment
submit a review Join our blog team

Proud Member of The US Family Guide Network